You are here: Home1 / News2 / News3 / Brinkerhoff Enshrined into Ohio Hall of Fame 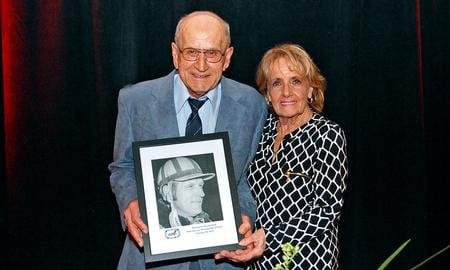 The Ohio Chapter of the United States Harness Writers Association hand out its annual awards at the Ohio Harness Horsemen’s Association banquet on Saturday (Jan. 19) at the Marriott University Area Hotel in Columbus.

Tom Brinkerhoff, one of Ohio top trainers/drivers, was enshrined as the 45th member of the Ohio Harness Racing Hall of Fame.

Brinkerhoff was elected into the Northfield Park Wall of Fame in 1994 and received the Jerry Kaltenbach Memorial Award as the top Ohio Sires Stake trainer in 1995.

He is credited with 1,695 career driving wins and made his final career start, a second place finish, at the Richland County Fair in 2016.

The Ohio Chapter also honored Aaron Merriman as the recipient of the Winner’s Circle Award for the Ohioan who has achieved outstanding accomplishments in the past year; Trevor Smith as the Peter Haughton Memorial Award winner as the young Ohioan who is an “up-and-coming” star among harness horsemen; Pius Soehnlen into the Immortal Hall of Fame; First Breath into the Standardbred Hall of Fame; and Dave Bianconi as the winner of the Rambling Willie Award for the Ohioan who has done the most for harness racing over the past two decades.

Merriman, North America’s 2018 Dash Driving champion, recorded 1,141 seasonal wins to become the first driver to record 1,000 or more wins in multiple years. He was also selected as the “Driver of the Year” by the United States Harness Writers Association.

Smith is a 22-year-old resident of Washington Court House, Ohio. He enjoyed a tremendous 2018 season with 104 driving wins and earned more than $1.1 million in purse money.

Soehnlen was a great trainer and driver and gained fame with the great trotter Dream Of Glory, who won 50 of 86 career starts, was a four-time Dan Patch award winner, set world records before becoming an influential sire. Soehnlen bred and campaigned many other champions over the years, among them Stoneking, Fence Post, Proxies Garland, Preshlash and Kick A Lot. Early in his career he also drove Pickwick Baron. He passed away in January 2016 at the age of 76.

First Breath earned over $100,000 during her four year racing career, winning 28 of 58 career starts, but the daughter of the pacing sire Hold Your Breath left her mark by producing several of Ohio’s top trotters. Owned and trained by Duane Lowe, First Breath produced 13 foals — six of which earned $100,000 or more. First Breath is the dam of BV’s Sister winner of $643,000, BV Victory and Final Breath.

Bianconi is the Executive Vice President of Racing & Simulcasting for Northfield Park. He has been at the Cleveland area track for nearly 30 years and is considered the architect of one of the largest simulcast networks in harness racing. Bianconi is a director for the United States Trotting Association and part of the on-air talent team for the simulcast show at the Delaware County Fair and Little Brown Jug.